Where Are They Now – Alphaville 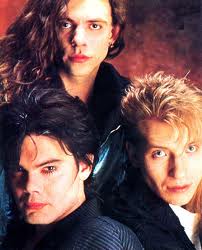 Then: When mentioning german synthpop band, Alphaville, most people identify and sing along to their single, Forever Young, which seems to have appeared on every Drew Barrymore-like 80s inspired romantic comedy and “That’s So 80’s” compilation cd. Ironically, although these soundtracks and compilation cds make it look like this song was a massive hit in the day, the sad truth is that it failed to make much of an impact in the charts at its release and even re-release. Actually, it is now forgotten first single, Big In Japan that conquered the European charts. But this band is so much more than these two songs. First album, Forever Young is a synthpop classic, and one of my all-time favorite albums with hardly any filler.

Now: Alphaville reemerged out of seemingly nowhere last year and released Catching Rays On Giant which became a huge hit in native Germany and first single, I Will Die For You Today became a top 20 hit, their biggest hit since Dance With Me in 1985. I wasn’t able to find any embed code to show you this video (if you have it, send me and I will post) but I was able to finally get the video for second single, Song For No One.

And here is a remix of I Will Die For You, a stripped down but similar sounding to the single version to give you an idea of what it sounds like until I can get a video

This entry was posted on Friday, April 15th, 2011 at 5:03 pm and is filed under Alphaville, Where Are They Now. You can follow any responses to this entry through the RSS 2.0 feed. You can leave a response, or trackback from your own site.

One Response to Where Are They Now – Alphaville