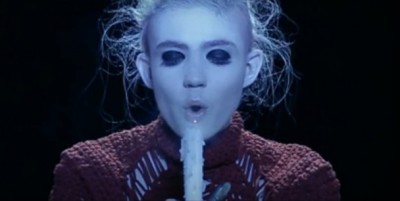 Nightmusic is the second official video taken from Grimes‘ critically lauded and breakout album, Visions. The video, directed by John Londono, features Boucher as some sort of mythical sorceress and temptress who lures a young, totally naked (re: possibly NSFW) earth couple from the safety of their earth den to venture out into the forest. The fate of our couple is never made explicitly known, but for some odd reason, their love den is replaced with… glowing eggs. What this all means, we haven’t a clue, but it is nonetheless beautiful to watch.

We love this unofficial video for the Grimes track, Circumambient. Grimes is Montreal-via-Vancouver musician, Claire Boucher, who is one of the more exciting artists to emerge recently and Circumambient has just the right amount of kinetic energy and industrial beats to get your groove on. The video, compiled by David Dean Burkhart, splices footage from the 1968 film, La Prisonniére. Circuambient is taken from the album, Visions. 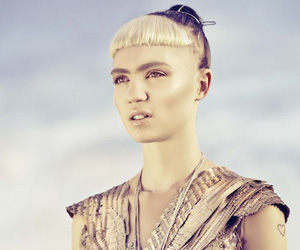 Goth is the new black, again. Shortly after announcing her album deal with 4AD, Montreal’s Grimes (Claire Boucher) has unveiled a new track from her forthcoming Visions album. Genesis is dripping in piano, synths and reverb and although it has humble beginnings causing the listener to fall into an almost dreamlike trance, things kick up a bit around the 1 minute mark, where it veers more into Delerium/Deep Forest territory. Best of all, Grimes has made the track a guilt-free download. Expect to hear more great things from her this year.