We have raved many times about Synth Britannia, the 2009 British documentary that documented the rise of synthpop music from the late 70s to early 80s and included extensive interviews and rare clips from The Human League, Heaven 17, Gary Numan, Depeche Mode, Kraftwerk, Cabaret Voltaire, Vince Clark and OMD amongst others. Because it was shown on the BBC, the only way to watch/steam it was to use a computer in the UK (or trick your computer into having the BBC site believe it was). Chopped up clips have appeared on YouTube for awhile now, but finally, an uninterupted full verision is available on YouTube. We are not sure how long this link will last, so catch it while you can.

Where Are They Now – Orchestral Manoeuvres in the Dark (OMD) 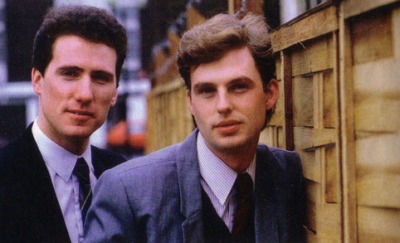 Then: The story of OMD is sadly, a familiar one. Although OMD have enjoyed commercial success in the UK since 1980, in the US, like many quality UK electronic acts from the decade, OMD’s prominence in American culture began and ended with one hit single, 1986’s, If You Leave. It was this song that defined the teenage angst of the x- generation from its inclusion in the seminal John Hughes movie classic, “Pretty In Pink.” Whereas the US audience finally took notice, a backlash began in the UK as fans dismissed their new sound for being “watered-down”. This new found success in the US was fleeting, however, and although they a spattering of other minor hits, they never recaptured their orignal glory. The price for this new commercial sound, however would have disasterous consequences in the UK. Fans dismissed what they felt was a betrayal of their roots and in 1996, OMD called it a day.

Now: Everything changed, however, last year, when the now classic BBC documentary Synth Britannia, which recognized the band as true pioneers of electronic music. Buzz formed and last year, after a nearly 15 year hiatus, OMD reformed and released the critical successful, History Of Modern.

Read my review of the show

80s, OMD, Synth Britannia, Where Are They Now |