Erasure – Fill Us With Fire

Synthpop innovators, Erasure have released a video for their forthcoming single, Fill Us With Fire, the third to be taken off their latest album, Tomorrow’s World. The red-hued kaleidoscopic video appears to have been shot during their last tour and features an increasing number of morphing Andy Bells taking center stage as a more subdued Vince Clarke plays on. We like the upbeat ballad and are happy to report it is more of a return to the classic Erasure sound (and even reminds us a bit of Chains of Love). We are including the fun JRMX remix.

When I Start To (Break It All Down) is the new single, out today, by Erasure, and will be included on Tomorrow’s World, their fourteenth studio album. We are liking this remix, in all its unabashed HI-NRG glory, which we feel is more in tune with the Erasure we know and have fallen in love with.

We recently got to see Erasure live. Check out our Review of the show.

Concert Review: Erasure. L’Amour For the Old, A Little Respect For the New 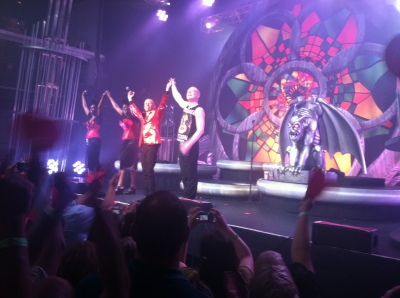 Synthpop pioneers, Erasure gave a croud-rousing, jump-in-the-air performance last night at Terminal 5, the first of two NYC shows in support of their new album, Tomorrow’s World. Suprisingly, I had never been to an Erasure concert before, although this wasn’t intentional – I love this band! I met up with friends also attending and when we arrived at 8:30pm,  Frankmusic was already taking his final bow (I really ought to plan better next time). I was excited at the possibility of reliving memories through song and curious to hear their new material since the album hasn’t come out yet (but you can hear the first single here). Would I be impressed? Would seeing them now after all these years be worth the wait?

Erasure started their set early (around 9pm), with Andy wearing what could best be described as an outfit inspired by the horse puppets in the current broadway hit, Warhorse and a set design from the Toscano catalogue. This was contrasted by the relatively low key opening, Sono Luminus, an album track taken from their overlooked 1995 self-titled album. The crowd went wild, however, with second number, Always, their final American hit. Just as the energy peaked, the energy was subdued again by their new single, When I Start To (Break It All Down). It was met with a warm reception, however it became clear that this crowd came to hear their hits. Drama followed, and it got everyone moving again as did, Chorus, both of which got the crowd shouting along with the lyrics. Vince came up from behind his keyboards and grabbed a guitar to perform Victim Of Love which proved one of the highlights of the show, although it became obvious that there wasn’t the same chemistry between Vince and Andy than there was with Andy and his backup singers. Other Showstoppers included Chains Of Love, A Little Respect, Sometimes and Oh l’Amour. The new songs, although well received, didn’t have the same energy and reaction from the crowd, who most likely, were hearing the songs for the first time. It’s a shame the album wasn’t released earlier, or the tour start later, since this was a very devoted crowd who sang along and embraced the songs from their earlier career.

Overall, what did I learn? Erasure has amassed an incredible body of work, which has aged well, and is still adored by fans. This became obvious, when contrasted with their new material that was not met with the same level of enthusiasm. As my friend joked, it gave the crowd of mostly over 40 (myself included) a break, an opportunity to hit the restroom and grab a cocktail before “the really great stuff came on.” Overall, 5 new out of over 20 songs was not enough to damper the evening and I had an amazing time and was suprised how quickly it had ended. I strongly recommend you check them out and appreciate the genius that they are.