Where Are They Now – Blancmange 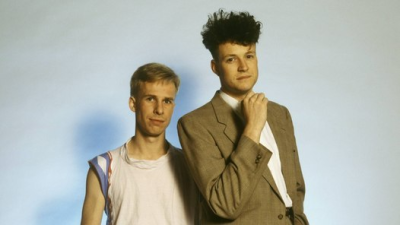 Then: Blancmange first came to prominence in 1982 with the album release of “Happy Families” whose classic single, “Living On The Ceiling”, mixed synthpop music , world beats and crazy gravity defying hair. It was a massive UK hit and got college radio play in the US. Less popular but just as anthemic was first single, “Feel Me”. There was great promise for second album, “Mange Tout” and it started out with the clever, (although slightly too similar to “Feel Me”) release, “Blind Vision”, but the album was a mixed bag, also containing the dreadful Abba cover, “The Day Before You Came”. This marked the beginning of the end for Blancmange whose fate was quickly sealed with rushed third album, “Believe You Me”, that fell on death ears. Blancmange soon disappeared into obscurity.

Now: Last year, Faithless released a cover of “Feel Me” featuring Blancmange on lyrics which built enough momentum for them to come out of hibernation. After 23 years, Blancmange is back with a new album. It is receiving decent buzz from reviewers, bloggers and fans alike, most notably The Manchester Guardian, which triumphed their return, awarding the album 4 out of 5 stars . Check out first single, “Drive Me” and see if it was worth the wait.

Listen to and download Faithless’ remake of Feel Me.

This entry was posted on Sunday, March 27th, 2011 at 4:25 pm and is filed under Where Are They Now. You can follow any responses to this entry through the RSS 2.0 feed. You can leave a response, or trackback from your own site.

One Response to Where Are They Now – Blancmange