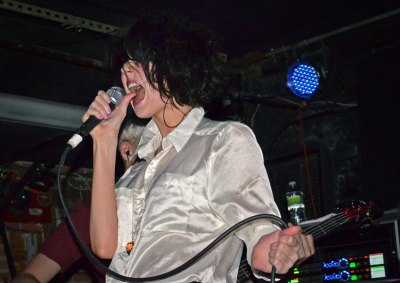 The Good Natured delighted the crowd and a barrage of press at the famed Mercury Lounge in NYC, all eager to capture the moment when a band is on the verge of crossing over to super stardom. For the unconverted, The Good Natured are impossible to pigeonhole; their brand of dark electropop occupies a space somewhere between the heart of The Cranberries and the look and attitude of Siouxsie & the Banshees, without sounding like either. They are made up of siblings Sarah and Hamish McIntosh and their pal George on drums. Although they have performed in NYC before, this concert seemed to be a debut of sorts since they had recently released their Skeleton EP, which has catapulted them to mass attention from the blogosphere (ourselves included). A debut album is slated for release this year. 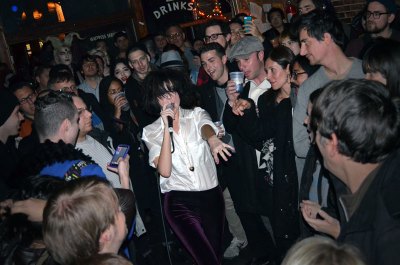 Set against a dark lit backdrop, The Good Natured took the stage shortly after 9pm and began strong with the infectious Video Voyeur, a track that was on our top singles list and which is available to download for free if you become fans of their Facebook Page. For their second track, the sexy Be My Animal, we literally assisted Sarah off the stage as she joined the crowd while singing and dancing, a connection between artist and audience that is rare, and that impressed us immensely. Sarah made her way back up to the stage to perform crowd favorite, Wolves which was followed by EP opener, Your Body is A Machine . Sarah returned to the crowd again for a new song, Dead On The Dance Floor, one that will likely be included on their debut album. The Good Natured closed the evening with single, Skeleton , a great track that got the crowd holding onto and singing along to every word. Although there was no encore, the crowd appreciated the band’s approachability as they walked into the crowd to take pictures and sign autographs. Although the evening may have been short on time, it was long on fun.

This entry was posted on Tuesday, January 17th, 2012 at 2:26 pm and is filed under Concert Review, The Good Natured. You can follow any responses to this entry through the RSS 2.0 feed. You can leave a response, or trackback from your own site.