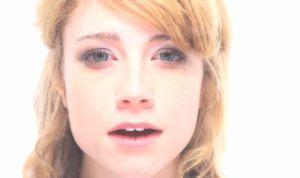 We are perplexed yet loving (possibly because we’re perplexed) this new, charming yet bizarre video by Computer Magic, directed by John McSwain. We don’t know what it’s really about, but we’ll take a stab at it. A young child (possibly Danz herself) feels she/he is being abducted by aliens. Parents being parents in a science fiction/horror movie, hatch the very bad scheme to dress mom up like an alien and abduct her/him, for god only knows what reason, only to find out there’s truth in their child’s assertion. Aliens truly do exit and shapeshift into the likeness of Computer Magic herself, who abruptly ends their prank by abducting them all. Good riddance I say! Video aside, if you like the idea of Zooey Deschanel singing ethereal synthpop in the same vein as Class Actress , you’ll get an idea what this song sounds like. We are so impressed that Computer Magic has created such a whimsical body of work all the while attending school, here in NYC. We are also digging Computer Magic’s reoccurring themes of space and other worldliness. In case you missed it, check her out as an astronaut lost on planet Times Square in the video to The End of Time.

This entry was posted on Wednesday, July 20th, 2011 at 9:46 pm and is filed under Computer Magic. You can follow any responses to this entry through the RSS 2.0 feed. You can leave a response, or trackback from your own site.