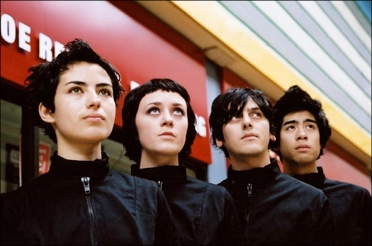 Ladytron are currently in Normandy filming the first single off their new album, Gravity The Seducer, which is due out in September. White Elephant is an interesting choice for a lead single. There is a definite experimental, almost dreamlike quality to it, not typical, of a lead single. They seem to be boldly comitting comercial suicide, however this is a band whose success has not relied on the chart performance of their singles, but rather on consistently great albums and frequent touring.

The band refers to the new album as “baroque-n-roll” relying less on electronics and more on organic instruments like the Autoharp, Conn organ, piano, violin and cello. The last time the band had a radical departure in sound was The Witching Hour, which introduced guitars and went on to become their most commercial and critically successful album. Let’s see if this change will have a similar affect and see how they will incorporate these new instruments and sound when touring.

This entry was posted on Monday, May 16th, 2011 at 1:19 am and is filed under Ladytron. You can follow any responses to this entry through the RSS 2.0 feed. You can leave a response, or trackback from your own site.

One Response to Ladytron – White Elephant (taken from new album, Gravity The Seducer)