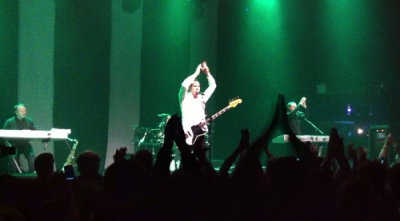 OMD have made their OMG return to a synthpop obsessed sold out crowd last night at Terminal 5 in NYC. Although many in the audience were likely fans during their heyday, there were a significant number of younger converts, who were introduced by the praise of recent synthpop artists like La Roux, Robyn and Hurts, who name Orchestral Manoeuvres in the Dark (or OMD as they are more commonly known) as their main musical influence. This was the first time OMD had performed in the US in 23 years and it was a serious gamble for them to invest on a tour here, but when the evening finally ended, lead singer Andy McCluskey, who was physically shaken by such an enthusiastic reception, vowed to return.

The story of OMD is sadly, a familiar one. Although OMD have enjoyed commercial success in the UK since 1980, in the US, like many quality UK electronic acts from the decade, OMD’s prominence in American culture began and ended with one hit single, 1986’s, If You Leave. It was this song that defined the teenage angst of the x- generation from its inclusion in the seminal John Hughes movie classic, “Pretty In Pink.” Whereas the US audience finally took notice, a backlash began in the UK as fans dismissed their new sound for being “watered-down”. Sadly, they never recaptured their initial critical and financial success on both sides of the Atlantic and in 1996, OMD called it a day. Everything changed, however, last year, when the excellent BBC documentary “Synth Britannia”, finally gave OMD the recognition as true pioneers of electronic music and the momentum surrounding this band has been building ever since.

My friends and I decided to meet for cocktails at Hell’s Kitchen bar, Industry prior to the show. One cocktail led to another, and as I am sure you have already gathered, by the time we left, opening act Oh Land had already gone on stage. We ran to the venue and were able to catch their closing, Son Of A Gun, an extremely catchy single that sounds vaguely like Adele if she embraced electronics. The crowd was clearly impressed and I predict great things from them. You can catch them when they perform at the NewNowNext awards coming April 11, 2011 on LOGO.

OMD finally took the stage shortly after 9pm and opened with an obscure track off their latest album, which created nice atmosphere, but didn’t get the crowd going. This was ok, though, because I was immediately taken by how well lead singer Andy McCluskey had aged. Now over 50, he looks hot! But I digress. The crowd found their footing with third song Messages and the momentum kept up while they played such classic hits as Tesla Girls, Forever Live and Die, So In Love and Joan Of Arc. It soon became clear OMD knew their target audience and weren’t going to alienate old fans with all new material, a point that Andy McCluskey actually joked about early in the evening.

If I were to identify a lull moment in the show, I would have to say it were the few songs performed after crowd pleaser, Maid of Orleans. This was confirmed when at one point Andrew himself seemed bored and sat down on stage while singing. Things picked up again with Locomotion and the show continued to build for the rest of the evening. Crowd favorites included Souvenir, Maid of Orleans, Enola Gay, If You Leave and the encore performance of Electricity.

When it was finally over, you could see that Andrew has moved by the reception. They hadn’t toured the US in 23 years and were told that there wasn’t a market for their sound in the US, but that this sold out crowd had proved his naysayers wrong. Because of our love and enthusiasm, he promised to return and this is something this fan is holding him to.

I just to give a special shout out for my sister Allison and bestest friend Jason for making this such an incredible evening.

This entry was posted on Wednesday, March 9th, 2011 at 3:25 pm and is filed under Concert Review, OMD. You can follow any responses to this entry through the RSS 2.0 feed. You can leave a response, or trackback from your own site.