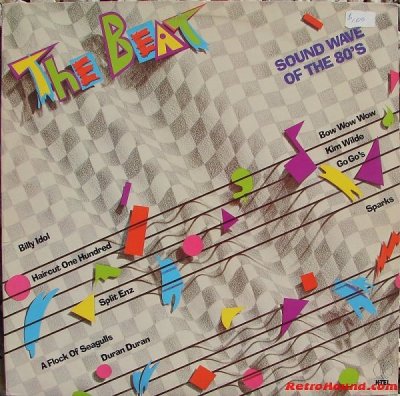 Our story begins as a young teenager who has yet to realise that the alienation he feels yet can’t explain would be understood once he came out, and who is fascinated by all things new wave (and perhaps slightly unhealthy addiction to Rock Over London), purchases a cassette that would forever change his life. Ironically it would be from the ultimate uncool label K-Tel (“As Seen On TV”) and called, “The Beat”. Never has an album contained such a roster of yet to be established musicians who would later define the new wave and synthpop genres. Artists like Depeche Mode, OMD, Duran Duran, Kim Wilde, Thompson Twins, Go Go’s and Split Enz. This cassette contained their very first recordings, way before they filled stadiums and became household names (at least to alienated youth throughout the USA). Not a dud on the entire cassette (well, except for Graham Parker, but I digress). I immediately fell in love with the OMD track, Joan Of Ark and followed their career religiously which culminated in seeing them live in the US in 1985. The venue was small since this was Syracuse, New York, a town on the forefront of absolutely nothing. It was also at an underage dance club; their target audience were teenagers who knew them from their song, “If You Leave”, a massive teenage anthem, which reached mass appeal after it was included on the soundtrack to the John Hughes film, “Pretty In Pink”. They played an amazing set of synthpop bliss. Afterwards they signed autographs and were very gracious to me as a bent over and had them sign a tour t-shirt I had just purchased. Never had a band been so accessible, and it is still a fond memory I hold to this day. Now where is that shirt?!

The Beat Track List
flock of seagulls: “i ran”
kim wilde: “kids in america”
haircut 100: “love plus one”
sparks: “i predict”
thompson twins: “in the the name of love”
graham parker: “you hit the spot”
the waitresses: “i know what boys like”
the go-go’s: “we got the beat”
bow wow wow: “i want candy”
duran duran: “girls on film”
split enz: “i got you”
depeche mode: “dreaming of me”
omd: “joan of arc”
billy idol: “hot in the city”

This entry was posted on Tuesday, March 8th, 2011 at 8:43 pm and is filed under 80s, OMD. You can follow any responses to this entry through the RSS 2.0 feed. You can leave a response, or trackback from your own site.

One Response to OMD Concert – Prologue